Steps 6/7–Separating the Living from the Dead

Steps 6/7–Separating the Living from the Dead 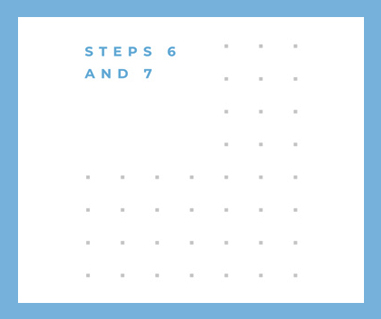 Step 6: Were entirely ready to have god remove all these defects of character.

Step 7: Humbly asked him to remove our shortcomings.

In my experience, these two Steps separate the living from the dead.

I once had an old sponsor who told me after a 5th Step that I had also just done Steps 6 and 7. I didn’t understand what he meant, but in a few months, my character defects led me directly to a relapse.

I’ve wondered for a long time if it would make a difference had he told me about these chapters in The 12 and 12. Looking back, I don’t think it would have–my character defects were not something I wanted to look at then.

They were all over the place, these defects. I was acting out sexually. I was lying to and cheating on my girlfriend. I was unwilling to help people or sponsor people. I didn’t care who I hurt or how I hurt them.

These character defects led me directly to a relapse where I was mixing drugs together that you should never ever combine. My life was in danger pretty much 24/7. I had several overdoses during this time. I’m lucky that relapse didn’t take me out.

That was 9 years ago. When I got sober after that, I was terrified of my character defects.

Over the years, I’ve seen a lot of people die or constantly relapse because they weren’t willing to look at their character defects.

After Step 1 and Step 12, I believe beyond a shadow of a doubt that the most important Steps are 6 and 7. I’ve always been frustrated that the Big Book devotes all of 2 paragraphs to these Steps. I’ve never understood why, but my guess is that the writers were still so early in sobriety.

Much more experience with the pain and misery of character defects while still managing to put together significant sobriety time.

I now understand them better than I did with a year sober, and even 5.

It took me years to see how much my character defects related to much of the misery I experienced in early sobriety (the first few years).

I knew that my sexual behavior and my dishonesty would no longer fly when I got sober this time. I knew in a vague way that these were character defects, but I didn’t really have the knowledge I needed to understand what a character defect really was.

My sponsor at the time was a great man and led me through the Steps quickly, for which I am forever grateful, but I don’t think he had the knowledge either to teach me what I needed to know about how important it was to work on these character defects.

When I finally decided to open The 12 and 12 (I had avoided it for a long time–I can’t tell you why), I found these two chapters.

They blew my mind.

They helped me to understand that my behavior I so feared to fall back into, the behavior I had sworn never to repeat was not just stupidity or selfishness (though it was both those things).

I have found this to be 100% true. Those character defects I mentioned–the dishonesty, the acting out sexually–they were removed almost entirely. I’ve had opportunities to act out that I’ve declined. I’ve told lies that I then made amends for. I’ve never let these things get out of hand again.

That’s not me doing that. That’s me aligning with my higher power.

That being said, I’ve still experienced a lot of pain and misery in sobriety as a result of other character defects. I’ve had to make a significant number of amends for gossiping. My stubbornness and refusal to take my mental health medication led to incredible amounts of problems in my marriage, at work, and in my friendships. I’ve almost lost friends because I refused to look at my anger issues. I’ve caused harm left and right because I wouldn’t look at my anger.

I’ve gotten a lot better in the past year. That only happened because I got beaten down by my character defects, to the point I was finally willing to take action, to pray into my Higher Power that they be removed.

Some weren’t removed, but the stubbornness that got in the way of everything else was lessened.

I don’t know how much longer I could have lived with that depression and anxiety and anger and suffering without putting a bullet in my brain or a needle in my arm.

I’ve seen others who haven’t been able to get past the stubbornness.

If they don’t kill you outright, character defects will destroy everything you love.

I’ve got a sponsee who has been relapsing for the past year, over and over, burning his life to the ground in the process.

We’ve narrowed down his problem. He’s not willing to believe in a Higher Power, and he’s so lazy that he won’t work the Steps with any sort of urgency.

I’ve met several sponsees who have essentially ruined their lives through laziness around the Steps.

I’ve done the same in the past. I understand this problem. The last relapse scared the laziness right out of me, but it was replaced it with a workaholism and impatience that have caused me yet more misery in sobriety.

I have another sponsee who suffers from a lack of willingness to believe in a power greater than himself. He goes on a crack binge about every 30 days. His pattern is terrifying. It only gets worse.

I know more than a few men who have died of being too busy to work the program. Sometimes it was work that killed them, leading them to stop meetings, stop calling their sponsor, and most deadly, stop sponsoring and carrying the message.

For some of them, it was codependency that took them out. They turned a woman into their higher power, and then off they went.

I have to wonder if there are people out there who’ve died of less horrible things, like gossiping that leads to being shunned, followed by guilt, one of the deadliest feelings I’ve ever seen in the program.

What character defects are going to kill you?

Are you willing to fight them? To ask your higher power for help?

I’m lucky I made it out alive. Remember, the stubbornness almost took me out at 8 years sober.

Character defects that aren’t dealt with don’t just go away. Being sober for a length of time doesn’t fix you.

If you haven’t, read those chapters in The 12 and 12, and ask yourself if you’re ready to face these.

Or if you’re willing to relapse instead.

Adam Fout is an addiction/recovery blogger who writes nonfiction and speculative fiction. He is a graduate of the 2020 Odyssey Writing Workshop and has been published in or has upcoming work in december, Another Chicago Magazine, The Doctor T. J. Eckleburg Review, J Journal, Pulp Literature, and DreamForge. Read more of his articles at adamfout.com.