Integrity – What Does It Really Mean?

Integrity – What Does It Really Mean? 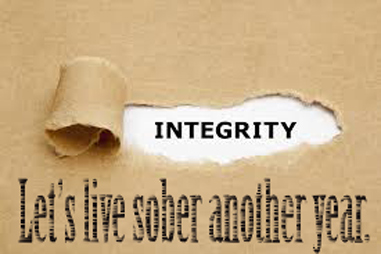 When asked, so many people give the same AA-Meeting-Room definition of integrity.

“It’s doing the right thing whether nobody is looking or not.”

It is a really basic definition for absolute beginners amounting to, “Don’t lie. Don’t steal. Don’t cheat. Ever.”

It only takes care of the stuff that could get you chased, arrested, or shot.

Granted, for many of us, that’s a giant step in the right direction, but it doesn’t necessarily keep us spiritually fit, and there’s a lot of gray area there.

We’re going to miss the point of the Sobriety Journey if we don’t grow beyond that definition.

The quality of being honest and having strong moral principles; moral uprightness.

The state of being whole and undivided.

We nail the first part as 12-Steppers, but many never consider the second deeply — being whole and undivided.

That means consistency in all aspects of life.

Our program is one of the soul, and the mind, yet it is a program of action. It takes shape out in the real-world interactions with other people.

If it doesn’t come out into the real world, we are not whole, and still living as insubstantial shadows between our own ears.

The Integrity of the 12 Steps